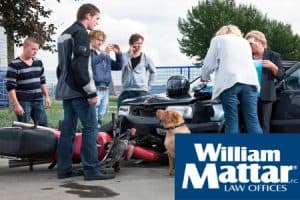 If you were injured in a motorcycle accident and intend to bring a lawsuit against the at-fault motorist, it is important to gather evidence. While you may have personal knowledge as to how the collision happened and can say that the other motorist was at fault, that may not be enough. For all you know, the other motorist will say the same thing: That you’re at fault.

Take, for instance, a collision in an intersection. Both streets are controlled by stop signs. Someone ran a stop sign, and someone failed to yield the right of way. If that is the case, it is your word against that of the other motorist. Who will the jury believe?

If you were injured in a motorcycle accident and make a claim for pain and suffering arising from your injuries, you are an interested party. What that means is that you are interested in the outcome of the lawsuit. There is nothing wrong with this; it is just a reality. You are bringing the claim to reach a certain outcome: Money to compensate you for your pain and suffering. The jury will know this, and take it into account. The at-fault motorist is also an interested party inasmuch as s/he likely does not want a jury to find that s/he must pay you money to compensate you for your losses (even though those losses will likely be paid by an insurance company).

The answer is a question of credibility, and the ultimate determination may hinge on factors over which you have no control. How do you increase the likelihood that the jury will believe you? The answer is simple: Do you have anything to corroborate, or back up, your side of the story?

Evidence is Critical in a Motorcycle Accident Case

Evidence is important because it can corroborate your side of the story and undermine any defenses of the at-fault motorist. For example, returning to our intersection hypothetical, if a local business had a camera aimed at the intersection at the time of collision and can provide footage of the collision, that footage would be critical evidence to undermine the at-fault motorist’s version of events. Along the same lines, if you had information concerning the identities of potential witnesses and can obtain statements from those witnesses, such statements could help bolster your version of events and undermine the at-fault motorist’s defense. This is because most witnesses are independent: They do not care about the outcome of any lawsuit.

If no camera was aimed at the intersection and no witness is forthcoming, you will need to probe further for evidence that can corroborate your side of the story. One potential source of evidence is electronic data from an event data recorder, often referred to as the “black box,” which can record information concerning vehicle speed, braking, and airbag deployment. This type of information can serve to corroborate or undermine the at-fault motorist’s version of events. For example, If the at-fault driver claimed you failed to stop at a stop sign, but the black box establishes otherwise, you will be in a pretty good position. Black box data is critical but fleeting: If it is not promptly downloaded by a qualified person, it can be lost forever.

As you can see, even though you may have a firm conviction you will be able to show the other driver is at fault, it is imperative to obtain evidence after a motorcycle accident. The motorcycle accident lawyers at William Mattar law offices have experience investigating the causes behind motorcycle crashes, identifying potentially liable parties, and obtaining helpful evidence. If you were injured in a motorcycle accident, give us a call today at (844) 444-4444.