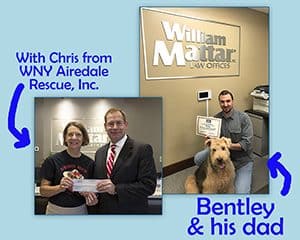 Bentley’s owner shares the heartwarming story of Bentley’s physical transformation and the bond they ended up sharing:

“Bentley’s rescue story starts in September of 2017. He was in terrible shape when he was surrendered to the Mohawk Hudson Humane Society in Menands, NY . Matted and knotted coat with filth caked into his fur. He also had kennel cough and was in tough shape. It was clear he had been neglected for a long time. 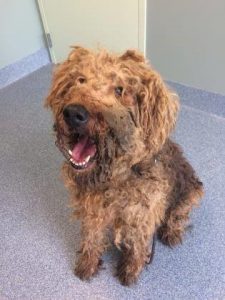 The kind people at the shelter could see the star that Bentley was. They gently bathed him and shaved him to remove all the nasty fur that was probably causing him discomfort. It was at the shelter where he was discovered to have kennel cough. They began treating him for that and provided him some basic vaccinations and preventatives.

The volunteers with Airedale Rescue of Western New York (ARWNY) constantly scrub the internet looking for wayward Airedales. They feel the best people to place Airedales are those that are most familiar with the breed. Plus, they have a network of foster families that are willing to foster an Airedale while a forever home is found. A volunteer saw Bentley on the shelter’s website and inquired within the shelter to see if they’d be willing to turn him over to the rescue. The shelter agreed that would be the best for Bentley.

The call went out for fosters to all the volunteers. I saw the request and stepped up. I had just lost my first Airedale to old age. I wasn’t looking for another dog, but I felt it was important to help Bentley until he could find his forever home. Bentley couldn’t be released right away as he had to finish his kennel cough treatment and vaccination protocols. But he was good to go within a few weeks.

A volunteer from the Albany area was asked to pick Bentley up from the shelter and drive him westward to the Utica area, where I’d be waiting to take him to my house. Upon arriving, I could see he was very nervous and unsure what was happening. But he seemed to be well behaved. I spent about an hour with him at the rendezvous point before loading him in my Jeep and driving home. He behaved well in the car; not a peep out of him. 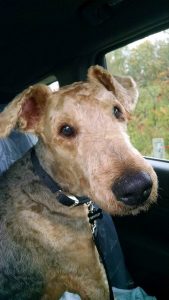 Back in Syracuse, I dropped him off to my groomer for a bath and nail trim and once over. The groomer said he behaved well with no issues. When we arrived at my house, he was so quiet. I don’t think he barked for 3 or 4 days. He was slowly getting used to me and his new routine. I took him to PetSmart where he picked out a squeaky toy that he still loves to this day.

It was clear that Bentley had some medical issues. His left eye was always tearing and he had a large lipoma on his chest. A visit to the vet confirmed those things and others were found. With blood work, it was discovered that he had increased protein in his urine and that he was Lyme positive. His teeth needed cleaning. He needed surgery on his left lower eyelid. The chest mass was probably nothing to worry about. And he had an ear infection. A plan was put together by his vet, myself, and ARWNY. We decided it was best to fix his eyelid as it was causing discomfort, clean his teeth, clear up his ear infection, and treat for Lyme. Surgery day came; they started with the eye; it went well. They then moved onto his teeth. That’s when they found three loose front teeth, so they had to extract those. The vet noted that his other teeth were flattened, so he was probably a rock chewer. And then of course we had to still treat for the Lyme. All went well with the surgery and tooth extraction. And he started on his doxycycline antibiotic for his Lyme. Bentley was a good sport about it all. The cone never really bothered him. We figured he was on his way to getting healthy and a then a forever home.

Then, in mid-December, he snapped at my mother when I was visiting with her. Well, as you could imagine, that threw a wrench in the works. We needed to find out why he did that. Was he in pain? We put him on a anti-inflammatory with no change. Was his thyroid out of whack? We did extensive testing of his thyroid with no abnormalities noted. At that point I thought it was necessary to bring in a veterinary behaviorist. I found one that was based out of Cornell and that traveled.
While I was waiting for our appointment, I began to research Bentley’s history. We scanned him and found a microchip number. I called the chip company and they provided me with a veterinarian’s name and number. I called them and was able to retrieve his records for the first three years of his life. But nothing after that. I then looked up veterinarians in the previous owner’s area. I called every one of them. One vet knew the previous owner. The previous owner took her cat there, but not Bentley. So as near we can piece together, Bentley never received any veterinary care for seven years of his life. Not even regular vaccinations. What we think happened, was that the original owners were elderly. He seemed to receive regular care for the first three years of his life and then nothing. We think the elderly husband provided the care he needed and when he died, the elderly wife could not handle Bentley. She might have just put him outside and left him there most of the time. Quite sad, really. I wish she could have realized earlier that she couldn’t provide him the care he needed. Or if one of her kids couldn’t convince her to surrender him earlier.

But it was clear Bentley had a tough life. We don’t know who his breeder was, but based on his size, how he’s “put together”, and his behavioral difficulties, it isn’t hard to believe that he came from a backyard breeder or a puppy mill. Couple that with a lack of proper care for so long, one can see why ARWNY and I felt it necessary to give Bentley every chance possible.

The behaviorist finally came to the house in February 2018. She was very professional. Did many tests on him, told me how to recognize his triggers, and redirect his attention if he gets stressed. The diagnosis was excessive anxiety. The behaviorist gave me prescriptions for trazodone and fluoxetine, and training exercises. It was all working well, and after a month or so, I felt he had made enough progress to move on to his forever home.

At the end of March 2018, I brought him to a potential adopter for a home visit. He got along great with their Airedale girl and their cat. He seemed to get along with the couple, too. They had a great house and a wonderful property. He would have tons of room to run and get lots of exercise. I took him back home and shared my report with ARWNY. We discussed it and all decided that it would be a good match for Bentley.

At the beginning of April 2018, Bentley moved on to his forever home. It was very hard for me but I knew it was the right thing to do. But it just wasn’t meant to be. About five days into the adoption, Bentley snapped at the husband. It was with many tears that the adopting couple felt he wasn’t a good match for them.
So I went and picked him back up. It was at that moment that I knew I was going to have to adopt him myself if he was going to be able to finish out his life. I shudder to think what the alternative would have been. I just couldn’t do that to him. He really bonded to me; trusted me. So that’s when I officially adopted him.

Bentley was a tough rescue. With his physical issues and then his behavioral ones. His story exemplifies the dedication and commitment that ARWNY and National Airedale Rescue has when taking in, caring for, and adopting out an Airedale.
There’ve been ups and downs with Bentley. He’s a senior dog (over 10 years old now), so old age is catching up with him. Vet bills are adding up. But he really seems to love and trust me, and I’ve grown quite fond of him. Even with all his quirks. He’ll live out the rest of his life with me, with love and in peace and quiet.” 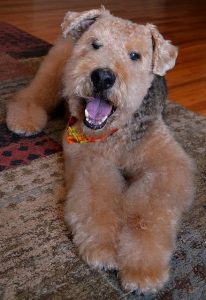 We want to thank Bentley and his dad for entering our photo contest and to all of the amazing pet parents and fosters who submitted their photos. A special thank you to those faithful voters who cast thousands of votes! We will be back next November for another contest. In the meantime, thank you to all who rescue, care for and love these amazing four-legged friends.