Does Uber’s App Cause Distractions for its Drivers? 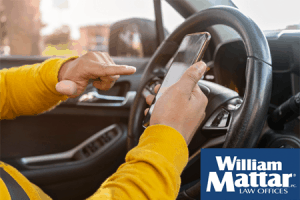 Ride-sharing services like Uber have revolutionized public transportation, reduced DUI rates, and been a flexible source of extra income for many people. The ease of booking rides, as well as the interactive user reviews for both passengers and drivers, has made Uber a boon to vacationers, commuters, and those needing a ride fast.

The way that Uber’s app is designed can sometimes mean that drivers have a very short (15 seconds) window of time to answer a ride request – and typically these requests come in while the driver is driving. Too many unanswered requests can lead Uber to suspend a driver from the program, so there is incentive for drivers to tap the screen.

Another feature of Uber is automated directions requiring the driver to use the in-app directions, which can be good for those who are not familiar with large, sprawling urban areas, but also a distraction for the drivers. Uber’s directions are created with complicated algorithms that take into account real-time road closures, accidents, and traffic jams, giving the most direct route and getting fares to their destination faster and saving the driver gas; however, these are yet another potential distraction for the driver.

For New York Uber drivers, the recent increase in texting and driving citations means that they have a higher chance of getting a ticket while using the Uber app. New York state law prohibits the use of a cell phone or any other electronic device while operating a vehicle. Uber drivers are not exempt from the law, despite the requirement that they use the app on their phone to drive their fares.

Penalties for texting and driving can be severe. According to the Department of Motor Vehicles, conviction of a cell phone use, portable electronic device or a texting violation can result in points being added to the drivers DMV driving record. A motorist who receives 11 points in an 18 month period could have his or her license suspended.

If you have been injured in an Uber car accident, an experienced car accident attorney such as those at the William Mattar law offices, can review your case. Give us a call at (844) 444-4444 or visit us online to get started!