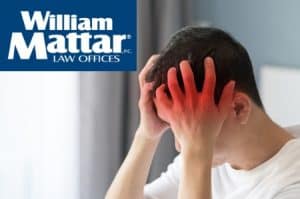 One car accident could change a person’s life forever. The serious injuries caused by a crash can sometimes take years to correct, and there are some cases where the damage is permanent. It is important to remember that a car accident can cause physical as well as psychological damage. For example, a traumatic brain injury combined with the psychological condition called Post Traumatic Stress Disorder (PTSD) can sometimes go hand-in-hand.

What Is A Traumatic Brain Injury?

A traumatic brain injury is the physical damage caused to the brain after a violent incident. Some brain injuries are “penetrating” head injuries (cracked skull or something pierces the brain) while others are “closed” (concussions or brain contusions that do not involve penetration).

Any type of brain injury will require emergency treatment to determine if the injury threatens brain functioning. Diagnostic scans, extended hospital stays and the need for doctors or surgeons specializing in neurology can drown car accident victims in a tidal wave of expensive medical bills.

Closed brain injuries may not produce immediate symptoms. In fact, there may not even be a visible mark where your head struck a solid object. Symptoms may not appear until the injury has progressed and worsened.

Signs of severe head trauma or brain injury include:

How Can A Car Accident Lawyer Help With Traumatic Brain Injuries?

Brain injury symptoms may not develop until days or weeks after an accident. This means your car crash attorney must prove that symptoms are directly related to the accident and not pre-existing conditions. A personal injury attorney will also take care of gathering medical documentation necessary for obtaining adequate compensation for your physical injuries. Diagnostic scans such as PETs, CTs and MRIs can be critical to support a brain injury diagnosis that is compensable.

Post Traumatic Stress Disorder (PTSD) is a mental condition that is caused by exposure to a dangerous, terrifying, or emotionally shocking event. Some signs of PTSD after a car crash may include anxiety about driving, intrusive thoughts related to the accident, nightmares about the crash, and / or avoidance of people, places, or things associated with the car accident.

Can A Car Crash Cause PTSD?

Yes. The American Psychological Association discovered that car accidents were the leading cause of PTSD among people who did not serve in the military. Car accidents were additionally found to be the number one overall trauma for men and the second most common occurrence of trauma for women.

What Is The Relationship Between PTSD and Traumatic Brain Injuries After A Car Accident?

In a car accident scenario, it is possible for the victim to get both a traumatic brain injury and PTSD. However, it is important to note that PTSD does not need to be caused by any physical injury. These are two separate conditions that have very different origins and treatment options.

The brain injury would be the physical result of the impact of the accident. For example, if something made hard contact with the head and damaged the brain. It is also possible that the severity of the accident left a mark on the victim’s psyche. The victim might never want to drive a car again, or the situation could become so severe that the victim becomes anxious when trying to ride in any form of road transportation.

If you sustained traumatic brain injuries or PTSD from a car accident, you may be entitled to compensation. Call the car accident injury lawyers at William Mattar today at (844) 444-4444.