WHAT YOU NEED TO KNOW ABOUT THE TAKATA AIRBAG RECALL 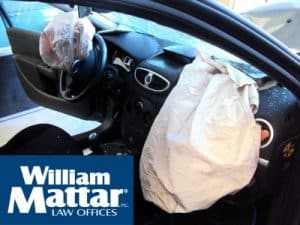 In the United States, airbags have saved tens of thousands of lives, including 2,790 lives in 2017 alone. But in rare instances, as in the case of the Takata airbag recall, airbags can fail to keep people safe and even cause serious harm to drivers and passengers.

Arguably, the Takata airbag recall, one of the most prominent airbag recalls to date, affected millions of vehicles and consumers. Tragic incidents of injury and death were caused by these defective airbags, the effects of which are still being addressed today.

The Takata Corporation, a now-defunct automotive company headquartered in Japan, is responsible for producing the defective airbags that prompted one of the most widespread recalls in history. Takata airbags have an inflator defect that causes them to explode or rupture when deployed, resulting in potential injury to the occupants of vehicles.

According to the National Highway Traffic Safety Administration (NHTSA)– the agency responsible for enforcing automotive safety standards—Takata airbag defects are triggered by “long-term exposure to high heat and humidity.”

For this reason, the NHTSA has prioritized the recall of airbags in areas of the country that are hotter and more humid, and therefore pose a greater risk. States are split up into three zones: Zone A, Zone B, and Zone C, with the least hot and humid locations last. Zone A, the high-priority states, include humid places such as Florida, California, Hawaii, and Texas.

An estimated 63 million Takata airbags have been recalled since 2016. NHTSA, working with Takata and automakers, created a phased approach to recalls to prioritize those that posed the highest risk of injury or death.

Since there are several different types of Takata airbags, some models are considered more dangerous than others. For instance, certain vehicle models contain “Alpha” airbags, which pose a 50 percent risk of failure (such as an explosion) that can cause injury or death. In 2019, one type of airbag supplied by Takata, which includes a “non-azide driver inflator” (NADI), was also officially recalled. This defect can cause the airbag to explode or underinflate when deployed. Vehicle models containing Takata airbags with NADI inflators were manufactured by companies like Audi, Toyota, BMW, Honda, Mitsubishi, and Isuzu.

In the U.S., at least 16 deaths and many injuries have been linked to Takata airbags. In some of these accident cases, the airbag rupture caused metal shrapnel to deploy into an occupant.

The Takata airbag recall has affected almost every major automaker in the world. This list includes, but is not limited to:

HAS MY VEHICLE BEEN AFFECTED?

To check if your car contains a Takata airbag, you can look at your Vehicle Identification Number (VIN), which can be found on your registration card or windshield. You can enter your VIN on the NHTSA website to see if your airbag has been recalled.

WHAT TO DO IF YOU HAVE A TAKATA AIRBAG

According to the NHTSA’s Consumer Fact Sheet, all Takata airbags that have been recalled will be replaced for free. Most likely, if your motor vehicle has been affected, you will receive a recall notice in the mail. Airbags replacements can be scheduled with your local car dealership.

If you’ve been injured by a Takata airbag or another defective auto product, contact William Mattar today. Our attorneys can examine your case to see if you have a potential product liability claim and guide you through the process of filing a claim so you can fight to hold those who caused your injuries responsible. Schedule a free initial consultation today by filling out our online consultation form, or calling our legal team at (844) 444-4444.