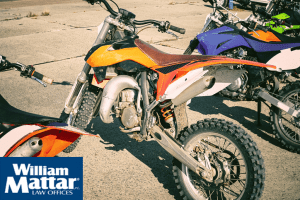 All-terrain vehicles (ATVs) and dirt bikes are popular vehicles with various functions. From outdoor recreation to everyday use, both dirt bikes and ATVs are generally equipped to drive on rugged terrains, such as rocky trails and dirt mounds. While fun and exciting, these vehicles can sometimes be dangerous. When dirt bike and ATV accidents occur, victims can suffer devastating injuries.

If you have been injured in a dirt bike or ATV wreck, contact William Mattar. Our personal injury attorneys can help you file your claim and pursue the compensation you need. The initial consultation is free, and our legal team is standing by 24/7 to get started on your case. Schedule a case consultation today by completing our online form or calling (844) 444-4444.

An ATV is a four-wheeled vehicle used for recreational riding, farming, hunting, camping, and more. These vehicles are commonly used in remote locations and areas, such as wooded forests. Some states in the U.S. have age restrictions for who can operate an ATV. According to the New York Department of Motor Vehicles, restrictions apply to riders under the age of 16, but if you are over 18, you do not need a specific driver’s license to use an ATV.

Despite having the stability of four wheels, ATV operation can be dangerous, particularly for young or inexperienced riders. They are heavy vehicles, meaning that a rider can sustain injuries under the vehicle’s weight in the event of a wreck. According to a report released by the Consumer Product Safety Commission (CPSC), 15,744 people died in ATV-related crashes from 1982 to 2018 in the U.S.

Children and young adults under 16 are among those injured in these crashes despite various age restrictions and other guidelines. According to the CPSC, this age group made up 21 percent of the total number of reported ATV-related deaths, totaling an estimated 3,353 fatalities.

Dirt bikes, unlike ATVs, typically have two wheels and are used for off-roading activities. Like motorcycles, dirt bikes are lightweight and can perform jumps and other stunts, making them a popular vehicle for riding sports. Many dirt bikes can travel at high speeds and clear the ground at great heights. For an inexperienced operator, dirt bikes can be especially hazardous.

Accidents and serious injuries are also a serious concern when it comes to dirt bikes because they offer riders little protection, subjecting riders to hazards like nearby trees, embankments, and rocks that can throw the rider from the dirt bike and cause grievous injuries.

While both dirt bikes and ATVs can be dangerous, some common factors can contribute to a potential accident. These include, but are not limited to:

Riding an ATV on roads can increase the risk of an accident as these vehicles are not designed to traverse pavement. In addition, certain ATV operations are often not legal on New York highways.

If you have been injured in a car accident, caused by someone illegally operating a dirt bike or ATV on public roads, contact William Mattar today to speak to an attorney.

An accident involving a dirt bike or ATV can be catastrophic or even fatal. Failing to wear a DOT-compliant helmet and other safety gear, as required by law, while riding either vehicle can increase the likelihood of severe injury. Depending on the circumstances, victims of a dirt bike or ATV accident can suffer:

Dirt bike and ATV injuries can be sustained in many different situations. If a party, such as the owner of a racetrack or off-road course, fails to maintain their property, resulting in hazards that caused your injury, you may have a case against that party.

The experienced accident attorneys at William Mattar Law Offices can investigate your case and advocate for you to receive compensation. Just call (844) 444-4444 today.