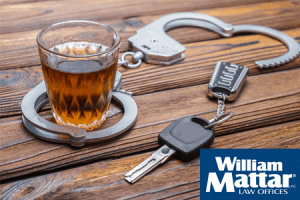 Drunk driving has devastating effects on innocent victims and their loved ones in the U.S. According to the National Highway Traffic Safety Administration (NHTSA), almost 30 people die in drunk-driving accidents every day. An estimated 10,511 people lost their lives in drunk-driving accidents in 2018 alone. The issue of drinking and driving is still a concern, and one way that law enforcement confirms a driver is under the influence of alcohol or drugs is by administering a field sobriety test.

At William Mattar, we help accident victims who have been injured by drunk drivers. If you’ve been seriously injured in a crash with a driver over the legal limit, call us today. Our accident attorneys will stand up for you after a drunk driving accident and make sure those responsible are held accountable. Our legal team is available 24 hours a day, seven days a week, to hear about your case – just dial (844) 444-4444.

What is a DUI or DWI?

A DUI stands for “Driving Under the Influence” and is a crime that can be committed when drivers operate a vehicle with a Blood Alcohol Content (BAC) above the legal limit. In New York, it is referred to as a DWI, which stands for “Driving While Intoxicated.” DWIs most commonly refer to driving under the influence of alcohol, but they can also encompass driving under the influence of any mind-altering drug.

The Penal Law contains the legal limit for DWI. In New York, there are tiers of alcohol and drug-related crimes and violations. With a blood alcohol content of .18 or higher, drivers can be charged with Aggravated Driving While Intoxicated (Aggravated DWI). Under the same Penal Law, there is also a category of Driving While Ability Impaired by Alcohol (DWAI), which indicates a BAC between 0.05 and 0.07. You should refer to the Penal Law and Vehicle and Traffic Law for more information about the various offenses.

Police officers help determine whether a motorist is under the influence of alcohol after pulling a vehicle over for a traffic violation or arriving at the scene of an accident. A chemical test is administered if there’s reason to believe the driver is over the legal alcohol limit. Police officers typically utilize a breathalyzer test for this purpose but may also request a blood or urine test.

Alcohol can seriously impair one’s judgment and ability to operate a vehicle safely.. Alcohol has negative effects on the central nervous system and can reduce brain function, impairing thinking and muscle coordination. Research has found that at a BAC of .08, the risk of a car accident “increases exponentially.”

Every individual is different, and alcohol can affect people in very different ways. For one person, only one drink is enough to reach the legal limit. Others may not become impaired until consuming three drinks. The level of intoxication caused by alcohol consumption varies depending on several factors, including:

If the driver that caused your car accident was drinking and driving, you might be entitled to compensation. Contact William Mattar today to speak to an attorney.

Consequences for a DWI in New York

Criminal penalties for a drug or alcohol-related offense vary in New York depending on the violation and the number of offenses over a period of time.

Is a Drunk Driver Automatically Liable?

Liability is important in a motor vehicle accident case. If a drunk driver struck you, you might be wondering if he or she is automatically responsible for the car accident. This may depend on whether the driver’s impairment was a factor in the cause of the car accident. For example, if a drunk driver rear-ends you at a stoplight, they will likely be considered liable.

However, every case is different, and an accident attorney can investigate your case to determine the best course of action. If you’ve been hit by a driver who is charged with a DWI, you could be entitled to compensation for your injuries from the driver’s insurance company.

If you or a loved with has been hurt in a car accident caused by a drunk driver, contact William Mattar Law Offices. Our experienced accident attorneys know the legal system in and out and will fight to get you the compensation you deserve after your accident. Schedule a free initial consultation today by completing our online form or calling (844) 444-4444 today.