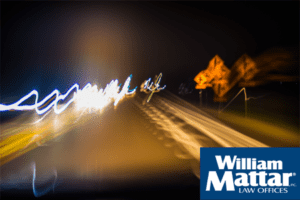 Most people know that drunk driving can have devastating consequences and that you should never drink and get behind the wheel. But drug-impaired driving is also a concern on roadways. Like alcohol, drugs (such as marijuana and opioids) can impair a motorist’s judgment, resulting in dangerous motor vehicle collisions.

Contact William Mattar today if you’ve been injured in an accident involving a drug-impaired driver. Our accident attorneys across New York State handle cases involving a variety of different situations, including drug or alcohol-impaired drivers. We can work to hold a negligent party accountable for their actions and help you recover from your injuries. Call (844) 444-4444 to get started on your claim.

Hundreds of drugs can cause impairment, including illicit  marijuana, opioids, and methamphetamines, as well as over-the-counter and prescription drugs with side effects.. Here are a few facts about drug-impaired driving.

Driving under the influence of drugs can increase the probability of a serious collision. Drugs can impair a motorist’s judgment, reaction times, and coordination, putting others on the road at risk.

Certain drugs, such as cocaine, can make a driver more reckless or aggressive. A drug-impaired motorist who is transporting passengers is also putting their vehicle occupants at risk of injury or death.

Drug impairment may contribute to a T-bone crash, rear-end accident, or a rollover due to speeding. It can also result in a head-on. For instance, a drugged driver may fail to notice or adhere to certain traffic signals and signs, such as a one-way street sign. As a result, they may go the wrong way down a one-way roadway, causing a crash.

It should go without saying, in addition to the apparent danger of driving while impaired, this decision can also have serious legal consequences. In New York, as in any state, it is illegal to drive while impaired by drugs. While you may be familiar with a Driving While Intoxicated (DWI) offense, which relates to a driver’s blood alcohol content, there are also drug-related violations.

Drug-related offenses can result in a number of potential penalties, including fines, jail terms, and mandatory driver license actions (including having your license revoked). Repeated offenders can be charged with a felony and face jail time.

What Do I Do if I’ve Been Hit by a Drugged Driver?

If you’ve been struck by a drugged driver and suspect you’ve been injured, consider seeking medical care right away. In the days following a car accident, you can also visit your medical provider to receive an examination and rule out any other injuries.

If you have been injured by a drug-impaired driver, we can advocate on your behalf. Our car accident lawyers can work to hold accountable those responsible for your accident and help you get maximum compensation. To schedule a free initial consultation today, fill out our online consultation form or call our legal team at (844) 444-4444. We are always available to answer any questions you may have about your case