William Mattar > Practice Areas > Car Accident > After the Accident > A Driver Ran a Red Light or Stop Sign, Striking My Car. Do I Have a Case?

A driver ran a red light or stop sign, striking my car. Do I have a case? 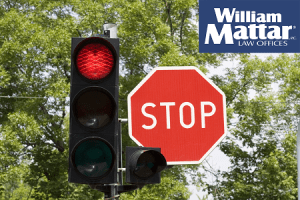 If you were involved in a car accident where the driver of another car ran a red light or stop sign, you may be wondering who is at fault.

Every driver traveling on New York roadways owes others a duty of reasonable care, which means they must obey laws and exercise care in every situation.  When a driver fails to uphold this duty of care, causing a car accident, that driver can be held responsible for any injuries and subsequent damages that result from the car crash.  This is known as liability.

The ways in which a driver can fail to uphold this duty of care, resulting in injury to others and giving rise to liability, varies. There are many potential factors that determine liability.

Failure to yield the right way

That being said, because car accidents happen every day, New York courts have developed rules and guidelines for determining the liability of motorists. These guidelines are not ironclad, but they do offer courts some helpful shortcuts when analyzing who is liable to whom after a car crash. One of these guidelines is the idea that a motorist who disregards a traffic control signal, such as a red light or stop sign, is at fault.

Article 26 of the New York Vehicle and Traffic Law explains which motorist has the right of way in a number of different circumstances.

When it comes to a vehicle turning left, Vehicle and Traffic Law 1141 provides that the driver of a vehicle intending to turn to the left within an intersection or into an alley, private road, or driveway shall yield the right of way to any vehicle approaching from the opposite direction which is within the intersection or so close as to be considered an immediate hazard.

In the case of a vehicle entering a stop intersection, Vehicle and Traffic Law 1142(a) states that:

Every driver of a vehicle approaching a stop sign shall stop . . . and after having stopped shall yield the right of way to any vehicle which has entered the intersection from another highway or which is approaching so closely on said highway as to constitute an immediate hazard during the time when such driver is moving across or within the intersection.

In the case of a vehicle entering a yield intersection, Vehicle and Traffic law 1142(b) provides that:

The driver of a vehicle approaching a yield sign shall in obedience to such sign slow down to a speed reasonable for existing conditions, or shall stop if necessary . . . , and shall yield the right of way to any pedestrian legally crossing the roadway on which he or she is driving, and to any vehicle in the intersection or approaching on another highway so closely as to constitute an immediate hazard during the time such driver is moving across or within the intersection. Provided, however, that if such driver is involved in a collision with a pedestrian in a crosswalk or a vehicle in the intersection after driving past a yield sign without stopping, such collision shall be deemed prima facie evidence of his or her failure to yield the right of way.

In the case of a vehicle entering a roadway, Vehicle and Traffic Law 1143 provides that the driver of a vehicle about to enter or cross a roadway from any place other than another roadway shall yield the right of way to all vehicles approaching on the roadway to be entered or crossed.

As you can see, the Vehicle and Traffic Law governs which motorist has the right of way given the particular circumstances, whether the motorist is approaching or entering an intersection, turning left, entering a stop or yield intersection, or entering the roadway.

For example, if Driver A is approaching an intersection and his or her lane of travel does not have a traffic control signal, while the intersecting road has a stop sign, he or she will most likely have the right of way. If Driver B is on the intersecting road and fails to stop at the stop sign, resulting in a collision with Driver A, Driver B will have failed to yield the right of way in violation of the Vehicle and Traffic Law.

Violation of the Vehicle and Traffic Law

New York courts have held that when someone violates a statute like those contained in the Vehicle and Traffic Law, such conduct can be considered “negligence per se.” What this means is that the act is considered negligent, potentially giving rise to liability, simply because it violates a statute.

The fact that the driver who failed to yield the right of way was negligent per se does not mean that the driver who enjoyed the right of way is free of any fault. New York is a comparative fault state, meaning that if the injured motorist is somewhat responsible for the collision because he or she took actions that caused or contributed to the collision, damages for personal injury may be reduced. This reduction would be in proportion to the injured person’s degree of comparative fault.

The car accident lawyers at William Mattar law offices are experienced in handling personal injury claims that happen as a result of motor vehicle collisions. If the other driver failed to yield the right of way or otherwise failed to use reasonable care to avoid the car crash, we are happy to review your case. If you need legal representation, give us a call at (844) 444-4444.