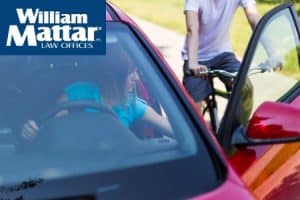 Bicyclists face numerous dangers when they go out for a ride or their morning commute. Where traffic is dense (such as in a city), a cyclist is at risk of a potential accident with passenger cars and other motor vehicles, which can result in serious injury. One unfortunately common type of bicycle accident is a “dooring” accident. A dooring accident can occur when a rider passes a parked vehicle, and the driver or backseat passenger opens his or her door into the rider’s path.

Many bicycle dooring accidents are abrupt and happen without warning. If you’ve been injured in this type of accident, William Mattar can help. Our bicycle accident lawyers know how devastating dooring accidents can be and will fight to get you the financial compensation you deserve. Contact our team at (844) 444-4444 today to get started on your claim.

Dooring occurs when the occupant of a vehicle that is parked next to a curb opens a driver’s side door into what is sometimes called the “door zone,” thereby causing a collision with an oncoming cyclist. The door zone is the area between the parked car and the right-hand lane, where bicyclists pass through. In addition to cyclists, pedestrians and other motorists can be “doored” while traveling alongside a parked car.

When a car door opens unexpectedly, a cyclist may smash into the door, swerve into traffic, or be pushed in front of other vehicles. In each of these scenarios, a bicyclist can suffer serious, life-altering injuries. Bicycle dooring may be more frequent in major metropolitan areas where cycling is more commonplace and vehicular traffic is concentrated.

Why do dooring accidents occur?

One common reason dooring accidents occur is that the motorist who caused the accident was not paying attention. The motorist may not have seen the cyclist traveling in the door zone or failed to check for approaching bicycles before opening their door. If a motorist fails to exercise care before opening his or her door, that motorist may be liable for a dooring crash that results in a bicyclist’s injuries.

Dooring crashes are dangerous since a car door that opens suddenly can take a cyclist off guard. When combined with the relatively high speed of a cyclist, the impact of a door can result in severe, catastrophic injuries. A dooring accident may also trigger a secondary accident where the cyclist is struck by another motor vehicle after colliding with the door.

If you’ve been seriously injured in a dooring accident, get in touch with a personal injury lawyer right away. The team at William Mattar can get started on your claim to ensure that you meet all applicable deadlines.

Who is at fault when a cyclist is “doored”?

According to Section 1214 of New York Vehicle and Traffic Law, no person shall open a car door “on the side available to moving traffic unless and until it is reasonably safe to do so, and can be done without interfering with the movement of other traffic.”

In other words, motorists and occupants of cars must exercise caution before opening their doors. If a motorist fails to do so and injures a cyclist, he or she may be at fault for the dooring accident.

Other factors may help determine who is at fault in a dooring crash. If the vehicle was parked legally or if the driver was distracted may play a role in determining culpability for the accident. If the bicyclist was riding recklessly or unlawfully when the crash occurred or was not visible to others (such as not using a bicycle light at night) could indicate that the cyclist shared fault for the collision.

If you’ve been injured after being doored while cycling, you may be entitled to financial compensation. An experienced accident attorney can investigate your case, gather evidence, and help determine who is responsible for your injuries.

Don’t suffer through the effects of a dooring accident injury on your own. The bicycle accident attorneys at William Mattar law offices are here to help. We will work with you to ensure your best interests are protected and guide you through the legal process. To schedule a free initial consultation, submit our online consultation form or give us a call at (844) 444-4444.