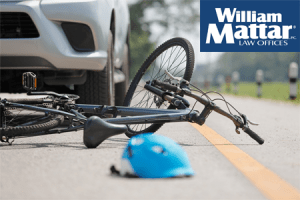 Bicyclists can be vulnerable on the road. In 2018, an estimated were killed in traffic accidents in the United States. Because they are more exposed to roadway surroundings, bicyclists can be more susceptible to harm when involved in a traffic crash.

Bike lanes—such as those in the City of Buffalo—are designed to keep cyclists safer. Sadly, riders in bike lanes can still be involved in a serious accident that results in life-altering injuries or even death.

If you’ve been injured in a bike lane accident, contact William Mattar law offices. Our bicycle accident attorneys can help you to file your accident claim and guide you through the legal process. Call (844) 444-4444 today to speak to one of our experienced attorneys.

WHAT IS A BIKE LANE?

A bike lane is a part of a roadway designated for the use of bicyclists. Bike lanes may be marked by signs or pavement striping, and they are frequently on the right-hand side of a road. Since certain streets, particularly multi-lane streets, can be congested, bike lanes are designed to give bicyclists space to travel with traffic flow while remaining safe.

Unfortunately, sometimes riders are injured in bike lanes. Even “protected” bike lanes that separate cyclists from cars with a physical barrier can leave riders vulnerable to collisions and injury. Several factors contribute to the risk of bike lane crashes, including the number of intersecting roads and the direction of traffic lanes.

While some cities are looking to enhance cycling safety (such as Salt Lake City’s proposal for a protected intersection), standard bike lanes remain the primary mode of transportation for many cyclists in metropolitan areas.

Individuals injured in a bike lane accident do not have to deal with the aftermath of a crash alone. Contact an experienced bike accident attorney at William Mattar today to speak with someone about your case.

Bike lane crash injuries can be life-threatening. Factors such as the motor vehicle’s size and speed, and whether the bicyclist was wearing a helmet at the time of the crash, can contribute to the severity of the injuries. Some common injuries suffered in bicycle lane accidents include:

If you’ve suffered a serious injury while traveling in a bike lane, don’t hesitate to call us. The time limits for filing a claim can be narrow, and our personal injury attorneys will get started right away.

WHO IS RESPONSIBLE FOR A BIKE LANE COLLISION?

If you’ve been struck by a motor vehicle while riding in a bike lane, the driver behind the wheel may be responsible for your injuries. This will depend on a variety of factors, including whether the motorist was driving safely and following all applicable traffic laws. If the driver was driving recklessly or not paying attention, you may have a claim for negligence. Likewise, if another bicyclist or a pedestrian contributed to the bike lane crash, they may be held liable.

A bike path or lane may be poorly maintained or unsafe in some cases, making riding dangerous. If you were injured riding your bike in a hazardous bike lane, the entity responsible for maintaining that bike lane may be at fault for the accident. For instance, you may file a claim against a municipality such as a county or city if that municipality failed to ensure the bike lane was safe for use.

The accident attorneys at William Mattar law offices can help determine which party may be accountable for your bike lane crash and assist you through the process of seeking compensation.

If you’ve been injured in a bicycle accident, William Mattar is here to help. Our personal injury attorneys can fight for you to achieve a financial recovery and get your life back on track. Don’t wait—dial (844) 444-4444 or submit our online form to schedule a free initial consultation.