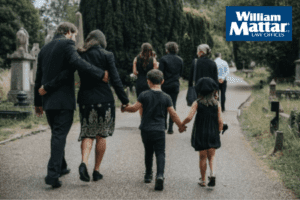 The New York State legislature has passed the “Grieving Families Act”, and the Governor of New York will now decide whether to sign or veto the important piece of legislation which, among other things, would broaden the categories of damages that can be recovered in a New York wrongful death claim, and the class or category of individuals for whose benefit a wrongful death claim may be brought. William Mattar, P.C. is following this piece of legislation closely because it could have important consequences for families of New York wrongful death victims.

New York’s existing wrongful death law only provides compensation for pecuniary damages, meaning tangible economic losses such as lost wages. At this time, damages for emotional anguish arising from loss of love, society, protection, comfort and companionship cannot be compensated. The law elevates the importance of “breadwinners” and fails to recognize the value of other family members who contributed to the family in non-pecuniary ways.

The Purpose of the Grieving Families Act

One purpose of the Grieving Families Act is to permit surviving close family members of wrongful death victims to recover compensation for emotional anguish. Lawmakers acknowledge that New York’s antiquated wrongful death statute is something of an outlier, with at least 41 other states allowing compensation of family members for emotional loss. According to lawmakers, “families who suffer the loss of a loved one . . . endure a second blow when they discover the civil justice system is unable to compensate them for their emotional loss.”

The Grieving Families Act would amend the Estates, Powers & Trusts Law (“EPTL”) to permit recovery of damages for emotional loss, making it possible for surviving close family members to receive compensation for non-economic losses. It would also permit recovery by surviving close family members, a change from the current law which provides that damages recovered in a wrongful death claim are “exclusively for the benefit of the decedent’s distributes.” A “distributee” means a person “entitled to take or share in the property of a decedent under the statutes governing descent and distribution.” Practically speaking, based on the structure of the Estates, Powers & Trusts Law, this means that in some cases surviving close family members, including but not limited to spouses or domestic partners, issue, parents, grandparents, step-parents and siblings do not stand to benefit in a wrongful death claim even though the person who passed away may have provided them with love, society, protection, comfort and companionship.

Statute of Limitations in a Wrongful Death Case

This is a very general summary of some of some changes the Grieving Families Act would cause if the Governor signs the law. William Mattar, P.C. is committed to helping people after wrongful deaths on New York roads. If you have questions about the Grieving Families Act and whether its passage could impact your case, please do not hesitate to contact our office to speak with a wrongful death lawyer for assistance. 844-444-4444.