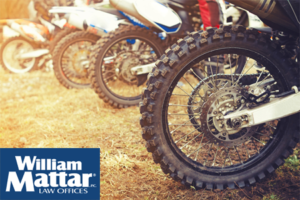 Accidents between cars and dirt bikes/ATVs occur frequently. Riding a dirt bike or ATV on certain roadways, such as highways and residential streets, is illegal in New York, yet some riders choose to take their off-road vehicles onto public roads, sometimes resulting in accident injuries or even deaths. Continue reading to learn more about the issue of illegal dirt bike and ATV riding and what to do if you are involved in an accident.

ATVs and dirt bikes (usually must be registered as ATVs in New York) are subject to specific laws.

According to the New York Department of Motor Vehicles (DMV), ATVs cannot be operated on a highway unless specifically designated for ATV use.

In New York, you cannot operate a dirt bike – also classified as an off-road motorcycle – on any street, highway, parking lot, or sidewalk that allows public motor vehicle traffic. A dirt bike or ATV rider who travels unlawfully on a prohibited road could be found at fault in the event of an accident with another vehicle.

Accidents with Dirt Bikes and ATVs on Public Roads

Riding an ATV or dirt bike unlawfully on a public road is dangerous for many reasons.

Dirt bikes are two-wheeled vehicles meant for off-roading. For this reason, these vehicles can be unstable and are not generally equipped for highways and public streets, especially if ridden by an inexperienced driver. Dirt bikes can travel at high speeds, so a speeding or reckless rider may potentially lose control of the bike or collide with another vehicle on the road.

ATVs are also not legal on most highways and streets. Motorists of other vehicles may not anticipate seeing these vehicles, which could lead to an accident. Accidents involving dirt bikes and ATVs can be deadly. According to the Consumer Product Safety Commission (CPSC), from 1982 to 2018, 15,744 people lost their lives in ATV-related accidents in the U.S.

If you’ve been injured in an accident with a dirt bike or ATV (that was driven illegally), you may be entitled to financial compensation. There are steps you can take to protect your claim immediately following an accident, including consulting with an experienced accident attorney.

An accident attorney can investigate your case, negotiate with insurance companies, and help establish fault. He or she can work to hold the rider accountable for their actions and find a source of compensation for your injuries, whether for medical expenses, lost wages, or pain and suffering.

If you’ve been injured in an accident with an illegal dirt bike or ATV, contact William Mattar today. There are short deadlines for an accident case, and our accident attorneys can help you get started on your claim right away. Call our legal team at (844) 444-4444 or complete our online consultation form to schedule a free initial consultation.