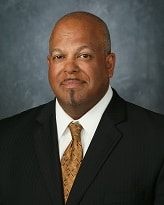 William Mattar law offices are pleased to welcome Christopher H. Gresham, Esq., to the firm’s attorney team. Christopher was born in Buffalo and raised in East Amherst. He attended Virginia Wesleyan University and Buffalo State College, where he graduated cum laude with a Bachelor’s Degree in Business Studies in 1991. Though he originally planned to take the police exam, Christopher was awarded a Graduate Fellowship to the University at Buffalo School of Law and went on to earn his Juris Doctor in 1994.  While in law school, Christopher was the Treasurer for the Sports and Entertainment Law Society, Regional Representative for the Black Law Students Association and earned Honors grades in Research and Writing, Trial Technique, Constitutional Law, Evidence, Federal Courts, Torts and Toxic Torts.  He was admitted to practice law in 1995 and joined the Erie County District Attorney’s Office in 1996, spending over 25 years there.

Christopher said, “I served the People of the State of New York for over two decades and have met with crime victims who have been at the lowest point in their lives. It was time to use my investigative and trial skills in a different way…and that is to help those who have been injured in a vehicle or motorcycle crash get properly compensated for the pain they have endured.”