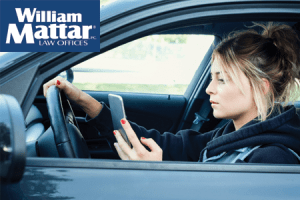 When you think of a distracted teenage driver, typically the first image that comes to mind is a young man or woman tapping away on a cellphone with their head down behind the wheel of a vehicle. While texting and driving continues to be one of the leading causes of car accidents, several studies show teens face numerous other distractions behind the wheel much more often.

A study conducted by the AAA Foundation examined more than 6,800 videos of teen drivers. From that group, researchers identified 1,700 videos capturing teens involved in accidents. Of those crashes, 58 percent were the result of distractions.

What’s most interesting about this study are the causes of distraction that were identified. Looking at something outside or inside the car or reaching for an object was the clear leader of distractions, accounting for a quarter of the recorded distracted driving accidents. Conversing with another passenger in the vehicle was responsible for causing 15 percent of the crashes, while talking on a cellphone made up only 12 percent of the accidents. The totals were rounded out by eight percent of collisions caused by singing or dancing to music while driving and six percent from grooming.

A study conducted at Oregon State University provided similar data regarding the causes of distracted driving other than cellphone use. They found only 40 percent of teens admitted to texting and driving, which was a significant decrease from the last time the survey was given. However, the team found other distracting behaviors had increased in frequency.

What You Can Do to Prevent Distracted Driving Among Teens

At William Mattar Law Offices, we’ve seen first hand the devastating results of distracted driving accidents. That’s why our car accident lawyers suggest talking with teen drivers about the risks. It’s also important for parents to lead by example by focusing on the road at all times when driving. Finally, creating a driving contract with your teen that outlines rules about speed, driving hours, distraction, and the number of passengers that can be in the vehicle can help reduce the chances of an accident.