It’s common for drivers to get frustrated on the road and become aggressive. Unfortunately, many drivers can grow increasingly aggressive when faced with traffic jams, lousy weather, or other inconsiderate drivers.

If you note signs of aggression on the road, you may be dealing with an aggressive driver and may need to take steps to reduce the risk of danger.

Signs of Aggressive Driving Are:

According to the NHTSA, speeding contributed to an estimated 26% of traffic accident fatalities in 2019. Not only does speeding raise the risk of an accident, but it also likely increases the severity of the injuries suffered by involved motorists.

It is important to obey the rules of the road and drive at a reasonable and prudent speed under the conditions.

At many intersections, or when merging onto a major highway or interstate, determining which vehicle has the right of way becomes critical. Failure to yield the right of way can lead to a collision that can result in substantial injuries.

Unfortunately, aggressive drivers can often plunge into intersections without taking time to consider the problems it may represent for other drivers.

Drivers who travel at excessive speeds may be more likely to weave through traffic.

Turn signals and brake lights help signal a driver’s intentions, making it easier for others to predict their next actions. Aggressive drivers, however, may fail to signal as required by Vehicle and Traffic Law 1163. They may change lanes abruptly, turn without warning, and even slam on their brakes so fast that it makes them very difficult to avoid.

If you notice a driver failing to issue acceptable signals, that could pose a potential danger.

A tailgating driver deliberately drives too close to the preceding vehicle, which may significantly increase the risk of a rear-end collision. Not only that, tailgating drivers may pose a danger to other drivers around them, since they may behave unpredictably.

While some drivers may follow too closely due to traffic constraints, aggressive drivers often tailgate in an effort to force the driver in front of them to drive faster or get out of the way. 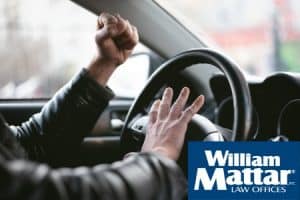 A car horn helps signal a number of important things, including a potential hazard in the road ahead. However, aggressive drivers may honk their horns more frequently or for longer periods of time, raising stress levels in everyone around them.

Aggressive drivers may also honk their horns in retaliation for the actions of other drivers, rather than to notify a driver of a potential problem ahead.

If you have suffered injuries in an aggressive driving accident, you may need an experienced lawyer to help guide you through an injury claim.

Contact William Mattar, PC today, or call (844) 444-4444 to learn more about your next steps after an aggressive driving accident.